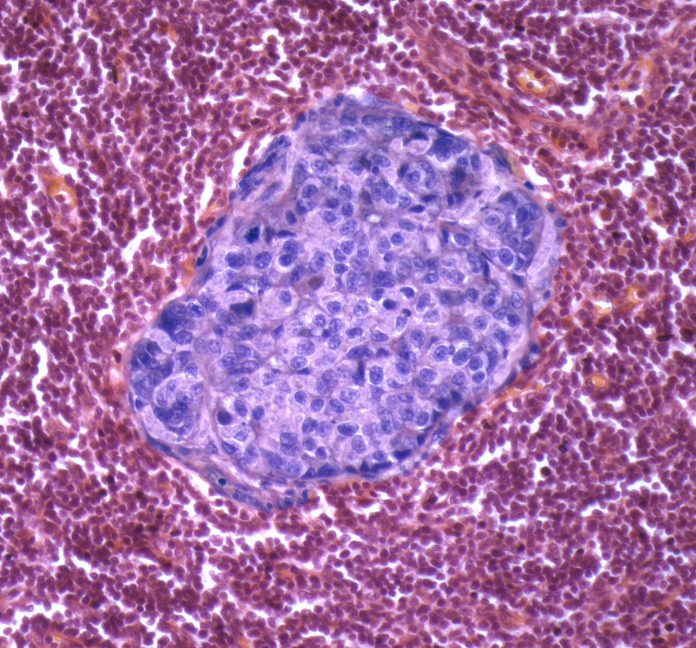 Researchers have identified a metabolic enzyme and pathway in triple-negative breast cancer (TNBC) patients that they hope could serve as a biomarker to select patients for targeted therapy, including one drug, CPI-613, currently in trials for other cancers.

These finding appear online in the journal Communications Biology. Senior author of the paper is Hui Feng, MD, PhD, associate professor of pharmacology and medicine at Boston University (BU) School of Medicine. The lead author is Ning Shen, of the Department of Pharmacology and Experimental Therapeutics, BU.

“Our work shows that a fraction of TNBC with high expression of dihydrolipoamide S-Succinyltransferase (DLST), a metabolic enzyme, in their tumor cells depends on the TCA-cycle for survival. Hence, DLST expression could serve as the biomarker to select TNBC patients to receive CPI-613, a drug currently in clinical trial for treating other cancers,” explained Feng.

Triple-negative breast cancer (TNBC) is the most aggressive form of breast cancer, accounting for 10-15% of all cases of this type of malignancy, and disproportionally affects young black women. The disease metastasizes quickly with high relapse and mortality rates. It is considered a glycolytic tumor and because these tumors lack hormone receptor overexpression and HER2 amplification they are not responsive to targeted therapies.

An effective approach to treat aggressive malignancies, such as acute leukemia, has been to target their metabolic dependencies. However, TNBC cells can be dependent on a variety of metabolic pathways. Early studies indicated they use predominantly aerobic glycolysis, but more recent showed they shift from glycolysis to mitochondrial oxidative phosphorylation (OXPHOS) during metastatic spread.  Their dependence on the tricarboxylic acid (TCA) cycle is unclear. As part of the TCA cycle, DLST is the E2 transferase of α-ketoglutarate dehydrogenase complex (KGDHC) that regulates the irreversible conversion of α-ketoglutarate to succinyl-CoA.

Researchers in the Feng lab analyzed human patient TNBC samples, human cell lines, including those injected into animals to define the contribution of DLST to TNBC pathogenesis. Comprehensive biochemical and molecular assays were also utilized to understand the metabolic and molecular properties of TNBC cells.

To study the role of DLST in breast cancer pathogenesis, Feng’s team performed in silico survival analysis using the online Kaplan-Meier Plotter. Patients were categorized into three groups based on the receptor’s expression in tumor cells: ER+, ER−, and TNBC. The researchers then correlated the expression of DLST and the other two KGDHC subunits, dihydrolipoamide dehydrogenase (DLD) and oxoglutarate dehydrogenase (OGDH), with survival probability among each patient group.

Importantly, DLST-dependent TNBC cells exhibit decreased tumor burden and invasion in zebrafish xenografts when treated with CPI-613, a lipoate derivative that can inhibit KGDHC activity and is currently in clinical trials for treating other cancers.

“Due to current challenges in treating triple-negative breast cancer, our studies suggest that a fraction of patients with aggressive tumors can benefit from CPI-613, a drug disrupting the TCA cycle if their tumor cells have high DLST expression,” said Feng.