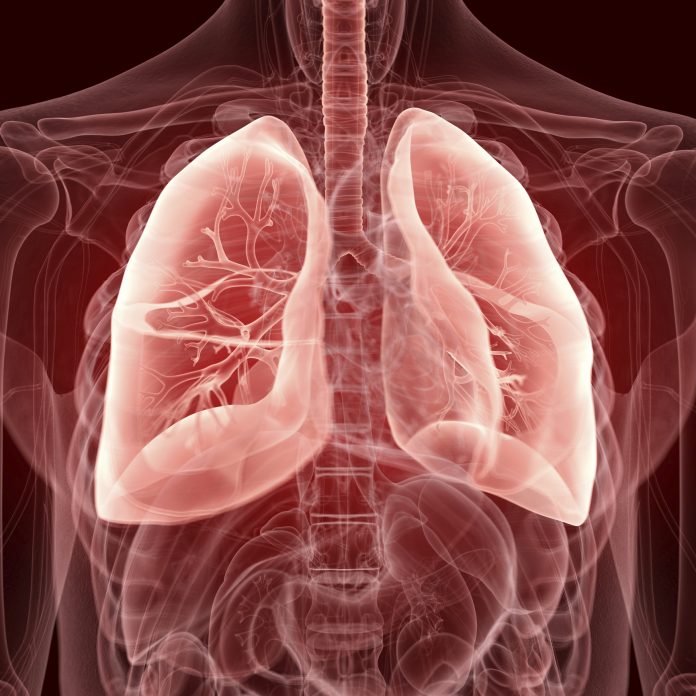 A CRISPR-directed gene-editing therapy, which targets a gene that enhances cancer cell survival in response to chemotherapy for non-small cell lung carcinoma (NSCLC), was recently developed by researchers at ChristianaCare’s Gene Editing Institute in Delaware.

The scientists found disrupting NRF2 in NSCLC tumor cells resulted in collateral damage due to CRISPR-mediated exon skipping, where the editing machinery skips over one or more protein-coding sections of a gene (exons) to produce mature transcripts of various lengths and proteins that are abbreviated versions of the original. Instead of ridding NSCLC cells of NRF2, the presence of these altered gene products resulted in a variable response to chemotherapy based on the functional domain of the protein that remained in the cancer cell.

“For NRF2, the truncated proteins generated by the CRISPR edit appear to be beneficial for making tumors more sensitive to treatment,” said Kelly Banas, PhD, a research scientist at the Gene Editing Institute who is the first author of the paper. “But the key point is these proteins were clearly biologically active. That means we needed to determine their potential impact on the safety and efficacy of using CRISPR to treat lung cancer patients.”

Eric Kmiec, PhD, executive director and CSO at ChristianaCare’s Gene Editing Institute, and the senior author of the paper said, “We found that when you use CRISPR, the edits sometimes end up altering rather than completely disabling the target gene. So, we developed a process to gain a more complete understanding of what that means for patients.”

In the new study published in the journal Gene Therapy, the authors characterized the diverse set of NRF2 transcripts that arise due to exon skipping induced by CRISPR/Cas9 activity. In a specific case, the authors found the alteration of a single nucleotide reorganized the Exonic Splicing Enhancers (ESEs)—sequences within exons that promote processes that splice exons into mature transcripts—and determined whether an exon is skipped or not.

Based on their study, the authors caution utmost care must be taken to avoid altering gene expression patterns when attempting to stop gene expression by designing highly specific guide RNAs since these altered gene products may affect the efficacy of chemotherapy.

The study advances the process of evaluating safety and efficacy when using CRISPR gene editing in developing therapies.

Kmiec noted that this study was inspired by his team’s unique perspective as part of a community health care system, of how lung cancer affects people from all socioeconomic levels. “Many lung cancer patients will not be helped by immunotherapy or targeted therapy because their genetic background is not amenable. Having had a long history in gene editing and understanding the clinical nature of lung cancer, we have been crafting a direct but modest approach to improve the quality of life of lung cancer patients, initially with late-stage disease,” said Kmiec.

Kmiec added, “CRISPR-directed gene editing in just about any cell, but certainly in lung cancer cells, might induce the gene to find a way to continue to function, despite functional knockout. Following the data of hypothesis-driven experimental outcomes in an unbiased way, our results indicate that cells in which exon skipping occurs appear to be more sensitive to chemotherapy, which is part of our therapeutic approach. This is validation of the approach and is good news as we can tentatively predict that gene editing could be even more effective than we had imagined for this initial cancer target,” said Kmiec.

Although their study on CRISPR-mediated disruption of NRF2 avoided any negative effects due to unintended genetic changes, Kmeic said, “it also points to the need that all gene-editing laboratories developing clinical applications need to be aware of the subtle changes that can occur. The central focus of our work is to produce a safe and efficacious therapy.”

Kmeic added, “Anyone developing CRISPR therapies needs to be on the lookout for edits that don’t fully knock out a section of DNA code—and evaluate the potential impacts for patients. They could be positive, as they were in our case, negative, or neutral, but they need to be known.”

In addition to precise pointers for evaluating the safety of CRISPR-mediated therapeutic strategies, the study also reports preclinical data to improve lung cancer treatments by using a CRISPR-based approach to disable or alter a master regulator gene product that blunts the efficacy of chemotherapy.

“We have designed a CRISPR biotherapeutic that will act solely on squamous cell carcinoma cells and not on normal cells. We have found this distinction to be more broad-based than simply lung cancer. We are particularly excited about this observation since it may pave the way to treat patients with CRISPR and have the genetic destruction of the target gene occur only in tumor cells and not in normal cells. This might be a big step forward toward clinical realization of the power of CRISPR-directed gene editing,” said Kmiec.

Thomas Cradick, PhD, CSO at Excision BioTherapeutics, who was not involved in the current study said, “Eric Kmiec and team add to our collective understanding of the effects of genome editing by demonstrating examples of nucleotide changes in ESE sites that result in changes in mRNA transcripts. CRISPR editing ESE sites can therefore be used to alter the mRNA transcripts. The authors demonstrate that it also should be followed, in cases such as this, to assay for unintended mRNA transcript changes from gene editing.”

Cradick also noted, quantifying the level of mRNA transcripts in edited and unedited cells would have added to the value of the study since, in his experience, unedited cells may include an assortment of transcripts.

Banas emphasized the need for orthogonal validation in determining gene editing outcomes. “In our study, we used many different methods to confirm the presence and outcome of CRISPR-directed gene editing on a genomic DNA, RNA, and protein level. We show the necessity of using various methods—as using one method or another may skew the CRISPR outcome. This is the first publication to use the novel and newly published genomic analysis tool DECODR, which was developed internally in our lab to overcome our CRISPR analysis needs.”

Banas pointed out, considering a CRISPR edit to be successful simply by testing for the absence of a targeted protein in its original form, is not enough—altered gene products must not be overlooked.

The team is currently wrapping up their preclinical studies on genotoxicity and biodistribution in a disease-relevant mouse model. “Our preliminary results suggest minimal off-target neogenesis and standard biodistribution profile. This work continues to reinforce the need for thorough analysis of all CRISPR outcomes and potential downstream effects as it relates to patient safety and efficacy,” said Banas.

To prioritize patient safety, Kmeic urges scientists to use this study as a template for conducting due diligence in developing CRISPR-based therapeutics.

CRISPR Comes of Age—As a Diagnostic